Nha Trang Temple tour is a great experience to see the History and Culture, this is included in a Special City and Countryside Tour  to give you a taste of Vietnam. 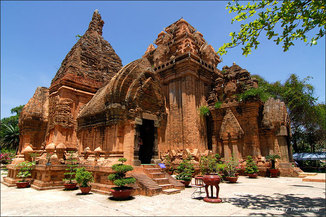 we recommend a sightsing tour around Po Nagar:

A Cham temple tower founded sometime before 781 and located in the medieval principality of Kauthara, near modern Nha Trang in Vietnam. It is dedicated to Yan Po Nagar, the goddess of the country, who came to be identified with the Hindu goddesses ﻿

A stele dated 781 indicates that the Cham King Satyavarman regained power in the area of "Ha-Ra Bridge", and that he restored the devastated temple. From this inscription can be deduced that the area previously had come under temporary foreign dominion, and that foreign vandals had damaged the already existing temple.


Other steles indicate that the temple had contained a mukhalinga decorated with jewellery and resembling an angel's head. Foreign robbers, perhaps from Java, "men living on food more horrible than cadavers, frightful, completely black and gaunt, dreadful and evil as death" had arrived in ships, had stolen the jewellery and had broken the linga. Though the king had chased the robbers out to sea, the treasure had been lost forever. The steles also indicate that the king restored the linga in 784.]

A stele dated 918 by the Cham King Indravarman III states an order to build a golden statue to the goddess Bhagavati. Later steles report that the original statue was stolen by the Khmer, and that in 965, the king replaced the lost statue with a new one. A stele dated 1050 says that offerings of fields, of slaves, of jewellery and of precious metals were made to the statue. Later steles indicate the celebration of a cult in honour of the goddess Yan Po Nagar, as well as the presence of statues dedicated to the principal deities of Hinduism and Buddhism

In the 17th century, the Viet people occupied Champa and took over the temple tower, calling it Thiên Y Thánh Mâu Tower. A number of Vietnamese legends regarding the goddess and the tower have come into being. 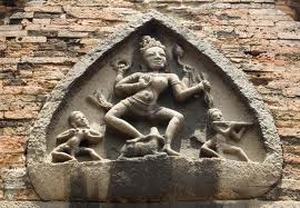 Durga, the slayer of the buffalo-demon, is represented on the pediment above the entrance to the temple.
The temple's central image is a 1.2m tall stone statue of the goddess Yan Po Nagar sitting cross-legged, dressed only in a skirt, with ten hands holding various symbolic items. According to Vietnamese scholar Ngô Vǎn Doanh, these attributes show that Yan Po Nagar was identified also with the Hindu goddess Mahishasuramardini or Durga, the slayer of the buffalo-demon.
Proudly powered by Weebly
verification: googleda4aa83eaad4bb48.html verification: googleda4aa83eaad4bb48.html