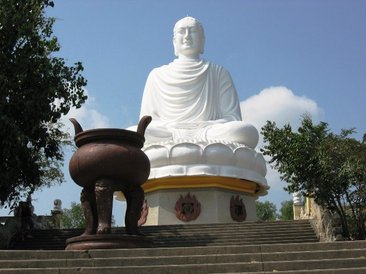 
History:
Long Son Pagoda was erected on the hill in 1886 under the Abbotship of Thích Ngộ Chí (1856–1935), who hailed from the district of Vinh Xuong in Khánh Hòa Province. Before joining the sangha, he was a participant in anti-French resistance forces that attempted to regain Vietnamese independence.

In 1900, after a large cyclone, the temple was destroyed and had to be moved from the hill to its current location. In 1936, the Buddhist Studies Association made the temple the headquarters of the Buddhist Association in Khánh Hòa Province. In 1940, the temple was renovated and expanded under the leadership of Thích Tôn Thất Quyền and a lay Buddhist by the named of Võ Đình Thụy. In 1968, the temple was heavily damaged during the Vietnam War, in particular the tiled roof. In 1971,

Since its construction, the temple has had a stable leadership, with only four abbots in over 120 years:

From the Long Son Pagoda, there is a large road leading up to Hai Duc Pagoda along the crest of the hill, where there is a large white concrete statue of Gautama Buddha. The statue was built on the site of the original temple and the statue was cast in 1964 before being installed the following year. The sculpture of the statue was by Kim Điền. From the ground up, the statues is 24 m, and from the base of the statue, it is 21 m. The figure of the Buddha is 14 m while the lotus blossom comprises 7 m. Around the statue are statues of seven arahants. In front of the statue are a pair of dragons, which are 7.20 m long. The statue is visible from afar as one enters the city, from either the national highway or by train.] 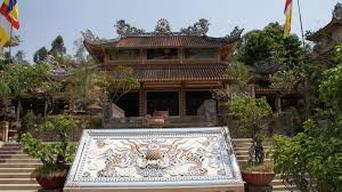 The entrance and roofs are decorated with dragon mosaics which are built from glass and ceramic tiles. The main ceremonial hall is adorned with modern interpretations of classical motifs. The nasal hairs of the dragons are wrapped around the pillars on either side of the main altar.
The reach the main statue climb the 152 stone steps up from the entrance of the pagoda, this is often used as a vantage point to look over the city of Nha Trang.